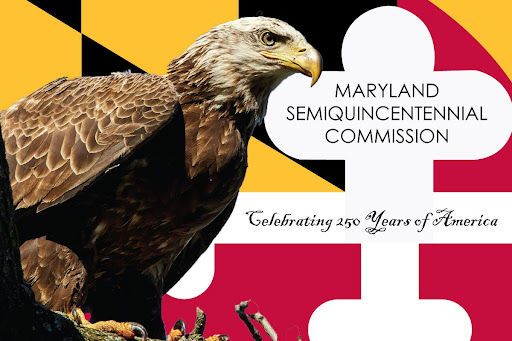 Maryland and the Birth of America

It is more than just a commemoration of one date.

It’s a celebration of the beginning of the American story.

In Maryland, it’s a collection of stories of unfolding the blessings of liberty through time.

As Maryland’s story unfolds, it is marked by events and places, but more importantly, the people who have challenged us to grow into a more perfect union.

In Maryland, George Washington entered our Statehouse as the victorious General of the American Army and left as a private citizen – unfolding the concept of civilian control over the military.

In Maryland, Harriet Tubman created a network of stations providing a pathway to freedom – unfolding a taste of the freedoms promised by our Independence.

In Maryland, steelworkers produced the ships and materiel that saved a world at war twice, unfolding our never ending stance against defeating the threat of tyranny.

The U.S. Semiquincentennial Commission was established by Congress to inspire all Americans to participate in our greatest milestone ever — the 250th anniversary of the founding of the United States that will occur in 2026. Every state in the nation, including Maryland, has begun planning the festivities to celebrate. On January 14, 2021, Governor Larry Hogan signed an Executive Order creating the Maryland Semiquincentennial Commission to commemorate Maryland’s unique role in the American Revolution. Our mission is to honor all Marylanders by remembering our past, celebrating the present, and looking forward to a promising future.

We’re charged with orchestrating the largest and most inclusive anniversary observance in our nation’s history. The Commission will work with public and private entities across the country to make America 250 a once-in-a-lifetime experience for all Americans.

We have partnered with The America250 Foundation, officially designated by the U.S. Semiquincentennial Commission to honor America’s 250th and will ensure Maryland’s critical role at this time in history is remembered.

Maryland played an integral part in the birth of our nation. On December 23, 1783, General George Washington came before Congress to resign his commission as commander-in-chief of the Continental Army. Just three weeks later, on January 14, 1784, Congress ratified the Treaty of Paris, officially ending the Revolutionary War, thus making Annapolis the new nation’s first peacetime capital. Other prominent events in Maryland include: Depiction of the burning of the Peggy Stewart in Annapolis from the book, Historic towns of the Southern States, 1904, Powell, Lyman P. (Lyman Pierson), b. 1866 Engraved by P. Maverick from a drawing by J. B. Longacre from Copley. William Paca was a signer of the Declaration of Independence and governor of Maryland. Portrait of Colonel Mordecai Gist of Maryland by Charles Willson Peale. Gist led the “Maryland 400” Major of Smallwood’s Maryland Regiment, and was with them in the Battle of Long Island where they fought a delaying action at the Old Stone House (Brooklyn, New York), allowing the American army to escape encirclement.