ANNAPOLIS, MD – The Governor’s Office of Community Initiatives yesterday kicked off the 2019 Day to Serve with more than 150 runners and volunteers. Governor Larry Hogan recently issued a proclamation declaring September 11 through October 10 as Day to Serve month in Maryland. As part of the announcement, Governor Hogan is encouraging all Maryland citizens and state employees to choose a day to participate in, or to host, a volunteer activity. The Day to Serve initiative includes Maryland, Washington, D.C., Virginia, and West Virginia, each of which tracks statistics including the number of volunteers, hours served, pounds of food, and supplies donated in a friendly competition.

In the morning, volunteers from the Office of the Governor, the Governor’s Coordinating Offices, and other state agencies, participated in a volunteer clean up of Quiet Waters Park alongside Marylanders. 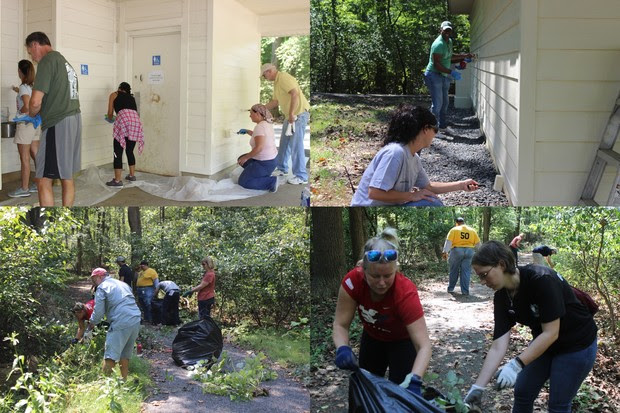 Volunteers painted the outside of restroom facilities and cleared nonpoisonous invasive species as part of the Governor’s Office of Community Initiatives Day to Serve kick-off.

A 9/11 tribute ceremony started with the moment of silence for those who made the ultimate sacrifice on September 11, 2001, and the presentation of a Governor’s citation to Ms. Cathy Powers by the Governor’s Office of Community Initiatives.

Ms. Cathy Powers, a Gold Star Mom, presented wreaths to a Maryland veteran and two retired first responders as part of the “Running Fir Wreaths” initiative in memory of her son, SRA Bryce Powers, and all veterans past, present, and future. Her goal is to run 1,000 miles across the 50 states and earn support for 7,777 wreaths – one for each day her son was alive – to support Wreaths Across America. Maryland is her 43rd stop.

The race ended and Ms. Powers put the 43rd sticker on her Wreaths Across America car.