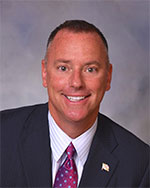 Steven J. McAdams was appointed executive director of the Governor’s Office of Community Initiatives by Governor Larry Hogan in January 2015.

A lifelong resident of Maryland, McAdams has more than 25 years of professional experience as a real estate broker and appraiser. Before joining the Hogan administration, McAdams and his real estate appraisal firm assessed the value of more than 75,000 single family homes across Maryland.

In February 2003, then Governor Robert Ehrlich appointed McAdams to The Maryland Real Estate Appraisers and Home Inspectors Commission. McAdams was reappointed to the Commission for two additional terms by former Governor Martin O’Malley.

An avid boater, McAdams currently resides in Edgewater with his wife and teenage son. 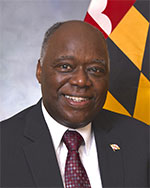 Winston Wilkinson was appointed chief of staff in the Governor’s Office of Community Initiatives by Governor Larry Hogan in March 2015.

Wilkinson is a native of Prince George’s County, Maryland. He was raised in Cedar Heights and graduated from Fairmont Heights High School, then the only African-American high school in the County. Wilkinson joined the U.S. Navy after graduating high school and went on to Morgan State University in Baltimore where he received his Bachelor’s degree in Business Administration. After finishing at Morgan State, Wilkinson went on to study law at Howard University Law School where he graduated in 1974.

In 1990, Wilkinson was appointed special assistant to U.S. Secretary of Education Terrel Bell and then later served as Deputy Secretary in the Office of Civil Rights during President George H. W. Bush’s administration. Following his service in the first Bush Administration, he relocated to Utah where he was elected to serve on the Salt Lake County Council.

Wilkinson returned to Washington, D.C. during the George W. Bush Administration, where he was appointed to lead the U.S. Department of Health and Human Services’ (HHS) Office of Civil Rights, under HHS Secretary Mike Leavitt.

Wilkinson returned to Maryland in the spring of 2015 and currently resides in Annapolis. He’s married to his college sweetheart, Gloria. They are the proud parents of four children and 12 grandchildren.