ANNAPOLIS, MD – The Maryland Commission on African American History and Culture (MCAAHC) celebrated its 50th anniversary Saturday night during the “We Rise!” Gala at the Banneker-Douglass Museum (BDM) in Annapolis, Md.; this year also marks the 35th anniversary of the museum. More than 200 people, including community leaders, elected officials, educators, members of the BDM Foundation Inc., and the Friends of BDM, joined the event and welcomed the newly-elected leadership and members of the commission: Chair Reverend Dr. Tamara England Wilson; Vice Chair Mr. H. Russell Frisby, Jr., Esq.; the Honorable Kweisi Mfume, a former state congressman; and Mr. Anthony J. Spencer, the great-great-grandson of James Spencer who founded Freetown in Anne Arundel County. The attendees participated in a moment of silence for and poetic tribute to the late Senator Elijah Cummings.

“Maryland has a rich African American history, and I would like to sincerely congratulate the Maryland Commission on African American History and Culture Commission on reaching this incredible milestone,” said Governor Larry Hogan. “Thanks to the tremendous work of our commissioners, our citizens have the opportunity to learn more about the lives and legacies of important Maryland heroes and American icons, including Harriet Tubman, Frederick Douglass, Benjamin Banneker, and Verda Welcome.”

The commission was established in 1969 by Senate Bill 185 to conduct a study of all proposals that would create a better understanding and knowledge of African American history and culture, and to make a recommendation to all Maryland Governors regarding legislative enactments necessary to carry out such proposals.

“As the nation’s first-ever ethnic commission, the commission has made history in Maryland and set the national standard for education and preservation projects for African Americans,” said Steve McAdams, Executive Director of the Governor’s Office of Community Initiatives, presenting a citation from Governor Hogan. “The work this commission has accomplished is invaluable in protecting Maryland’s rich history for future generations.”

The Hogan-Rutherford administration annually provides one million dollars in capital grants for the African American Heritage Preservation program through a partnership between the commission and the Maryland Historical Trust to preserve buildings, communities, and sites of historic and cultural importance to the African American experience in Maryland. In 2019, the commission awarded grants to 10 sites and buildings.

Earlier in this 50th anniversary year, Governor Hogan announced the Year of Frederick Douglass and named September as International Underground Railroad Month to honor Harriet Tubman. The commission has executed new projects and events, which have engaged hundreds of community members and more than 9,000 visitors to the museum.

“Fifty years later from its foundation, the commission has surpassed the original instructive,” said Chanel Compton, Executive Director of the Banneker-Douglass Museum. “The commission’s current mission to discover, document, preserve, collect, and promote Maryland’s African American heritage is demonstrated through its ongoing programs and the collections housed by our museum.”

The commission’s contribution to the museum enabled it to receive federal funds this year to strengthen African American culture and history in Maryland, as one of the only 14 recipients nationwide. The BDM opened the “Doing The Work” exhibit to honor the commission and record their work of the last 50 years; the exhibit will continue through December.

“Founded by Senator Verda Freeman Welcome, the first African American female state senator in the U.S. history, the commission continues to be seen as a model of change, not only to Maryland but also to the nation,” said Reverend Dr. Tamara England Wilson, Chair of MCAAHC.

The celebration was concluded with the We Rise Award presentations to Reverend Dr. Frances “Toni” Draper, Treasurer of the Board of Afro-American Newspapers; Devin Allen, Founder of Through Their Eyes; and DeWayne Wickham, Founding Dean of the School of Global Journalism and Communication at Morgan State University. 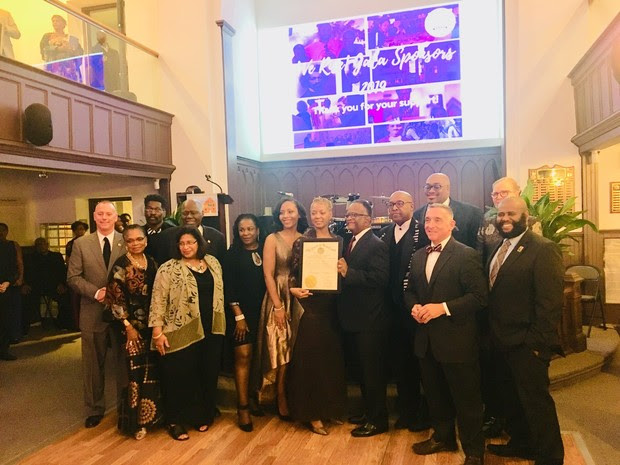 The Governor’s Coordinating Offices and Governor’s Office of Community Initiatives presented a citation from Governor Hogan to the Maryland Commission on African American History and Culture. 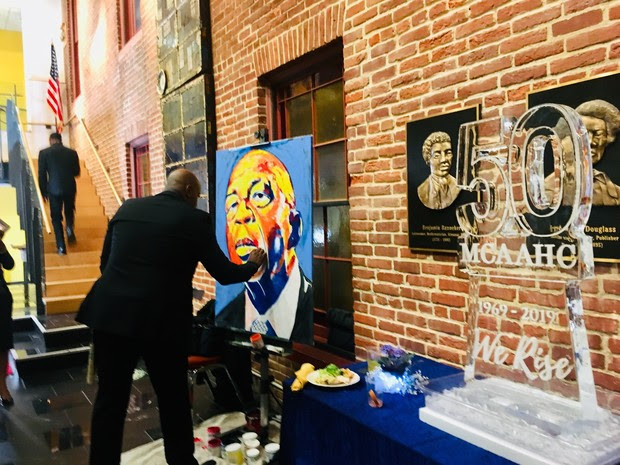 The Maryland Commission on African American History and Culture honored the late Senator Elijah Cummings through a moment of silence, poetic tribute, and artwork.